THE LOST GIRLS OF DEVON by Barbara O'Neal 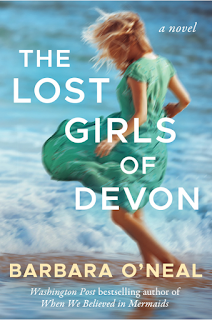 One of Travel + Leisure’s most anticipated books of summer 2020.

From the Washington Post and Amazon Charts bestselling author of When We Believed in Mermaids comes a story of four generations of women grappling with family betrayals and long-buried secrets.

It’s been years since Zoe Fairchild has been to the small Devon village of her birth, but the wounds she suffered there still ache. When she learns that her old friend and grandmother’s caretaker has gone missing, Zoe and her fifteen-year-old daughter return to England to help.

Zoe dreads seeing her estranged mother, who left when Zoe was seven to travel the world. As the four generations of women reunite, the emotional pain of the past is awakened. And to complicate matters further, Zoe must also confront the ex-boyfriend she betrayed many years before.

Anxieties spike when tragedy befalls another woman in the village. As the mystery turns more sinister, new grief melds with old betrayal. Now the four Fairchild women will be tested in ways they couldn’t imagine as they contend with dangers within and without, desperate to heal themselves and their relationships with each other.

“A woman’s strange disappearance brings together four strong women who struggle with their relationships, despite their need for one another. Fans of Sarah Addison Allen will appreciate the emphasis on nature and these women’s unique gifts in this latest by the author of When We Believed in Mermaids.” —Library Journal (starred review)

“The Lost Girls of Devon draws us into the lives of four generations of women as they come to terms with their relationships and a mysterious tragedy that brings them together. Written in exquisite prose with the added bonus of the small Devon village as a setting, Barbara O’Neal’s book will ensnare the reader from the first page, taking us on an emotional journey of love, loss, and betrayal.” —Rhys Bowen, New York Times and #1 Kindle bestselling author of The Tuscan Child, In Farleigh Field, and the Royal Spyness series

“The Lost Girls of Devon is one of those novels that grabs you at the beginning with its imagery and rich language and won’t let you go. Four generations of women deal with the pain and betrayal of the past, and Barbara O’Neal skillfully leads us to understand all of their deepest needs and fears. To read a Barbara O’Neal novel is to fall into a different world—a world of beauty and suspense, of tragedy and redemption. This one, like her others, is spellbinding.” —Maddie Dawson, bestselling author of A Happy Catastrophe

A story about family betrayals and long buried secrets that is beautifully written by none other than Barbara O'Neal who wrote the best-seller, When We Believed in Mermaids.

In THE LOST GIRLS OF DEVON, O'Neil writes about four generations of the Fairchild clan who are reunited back again in not so happy circumstances. Their reunion reopens old wounds, and the ladies are faced to deal with a new issue as their childhood friend has gone missing. The story is centered on Zoe Fairchild who has been living in the States, and who now has to travel back to England to her childhood home in Devon.

I enjoyed reading about the different POVs that really shows each of the women's perspectives and makes for a page turner too. The setting of the story is also fun to read as the English countryside and its beauty is highlighted. The mix of family drama with some mystery element made this a fun read for me that I enjoyed a lot.


Barbara O'Neal is the Wall Street Journal, Washington Post, and #1 Amazon Charts bestselling writer of women's fiction. She lives in Colorado with her partner, a British endurance athlete.
Posted by NURSE BOOKIE at 4:36 PM