9/15/20 A BETTER MAN: A (Mostly Serious) Letter to My Son BY MICHAEL IAN BLACK - ALGONQUIN BOOKS 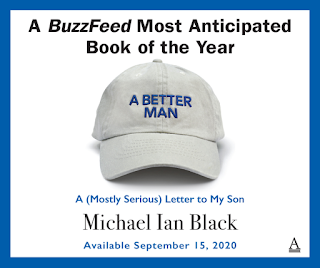 A poignant look at boyhood, in the form of a heartfelt letter from comedian Michael Ian Black to his teenage son before he leaves for college, and a radical plea for rethinking masculinity and teaching young men to give and receive love.

In a world in which the word masculinity now often goes hand in hand with toxic, comedian, actor, and father Michael Ian Black offers up a way forward for boys, men, and anyone who loves them. Part memoir, part advice book, and written as a heartfelt letter to his college-bound son, A Better Man reveals Black’s own complicated relationship with his father, explores the damage and rising violence caused by the expectations placed on boys to “man up,” and searches for the best way to help young men be part of the solution, not the problem. “If we cannot allow ourselves vulnerability,” he writes, “how are we supposed to experience wonder, fear, tenderness?”

Honest, funny, and hopeful, Black skillfully navigates the complex gender issues of our time and delivers a poignant answer to an urgent question: How can we be, and raise, better men?


A BuzzFeed Most-Anticipated Book of the Year

“We need this book . . . To read A Better Man now, when the world often seems beyond repair, so many generations of men having steered us into calamity with their brittleness and hubris and idiocy—one could wonder whether even a good book can make a difference. But then you’re snapped back to Black’s simple decency, and intelligence and love for his son, and you think, Oh man, maybe.”
—San Francisco Chronicle

“Surprising, occasionally sappy but often lovely . . . [Black’s] tone is so lovely, his empathy so clear . . . He does wonderful work breaking down the masculine coding surrounding his own behaviors.”
—The New York Times

"Parents will be moved and enlightened by Black’s thoughtful advice."
—Publishers Weekly

"There's something for everyone in these pages. Hand this to anyone who loved David Sedaris's Calypso."
—Booklist, starred review

“Heartfelt lessons for his college-bound son . . . Black lays out his thoughts and feelings with few defenses up and a comic lightness that doesn't belie the book's rather heavy truths . . . Thoughtful ruminations on masculinity in the modern age . . . Whether you're a parent or simply thinking about life choices, there's both melancholy and wisdom to be found here.”
—Kirkus Reviews

"Both thoughtful and lighthearted, this work will appeal to anyone interested in masculinity and modern gender roles."
—Library Journal

“I think about the subject matter of Michael Ian Black's new book all the time. As a parent of both boys and girls, I find myself rebuffing the gender-based cultural assumptions that are foisted on them more frequently than I could have ever imagined. Thank you Michael Ian Black for challenging society's antiquated approach to raising boys, and deepening the conversation about what we actually want for our kids. Sir, you are a good egg.”
—Samantha Bee, host of Full Frontal with Samantha Bee

“Gorgeous, authentic, and deeply thoughtful. This book is the perfect gift for a generation of men and boys desperate for guidance but raised to be afraid to ask for it. The way Michael Ian Black models vulnerability and writes about his own pain gives permission to every man across America to do it too. Michael's voice is necessary now more than ever, to offer men a different path, where they can be curious about their own gender and mount their own revolution for better definition of masculinity. I’m so glad this book exists.”
—Liz Plank, author of For the Love of Men: A New Vision for Mindful Masculinity

“It will never fail to amaze me that the man I best knew as Levon, a crushed velvet suit-wearing, $240 worth of pudding-rubbing smooth talker on ‘The State,’ has written a book that is at once insightful, incisive, deeply kind, urgent and wise (and of course funny as hell.) But that's what A Better Man is. The book isn't so much a call to create a new way of being a man as it to remember our innate and basic goodness.”
—Joshua David Stein, author of To Me He Was Just Dad

“I couldn’t put this down. An important book for anybody with a son. Michael Ian Black tackles the tough subject of masculinity in unexpected, tender, and sometimes funny ways.”
—Alyssa Milano, actor and humanitarian

"[This book] resonated with me like no other book has in years."
—Masked Library
THOUGHTS/REVIEW:

A Better Man is both a memoir and a heartfelt letter to comedian Michael Ian Black’s college-bound son Elijah, who is entering adulthood. In this honest, raw and emotional tribute, I was touched as a mother to a teen age son. It was the perfect book to read for me and I cannot help but agree and nod a lot about some of the experiences Black shares in this book. Black intimately shares his own life experiences as well as the early death of his father at 39 yo. This is such an important book to read especially for someone raising a son. I am definitely buying more of these books for friends and family as gifts.
A must read and one I highly recommend. 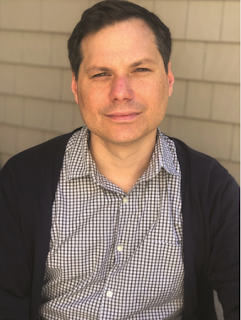 Michael Ian Black is an actor, comedian, and writer who started his career with the sketch comedy show The State, on MTV, and has created and starred in many other television shows. Movie appearances include Wet Hot American Summer, The Baxter, and Sextuplets.

Black is the author of several books for children, including the award-winning I’m Bored, I’m Sad, and I’m Worried, and the parody A Child’s First Book of Trump. His books for adults include the memoirs You’re Not Doing It Right and Navel Gazing, and the essay collection My Custom Van. Black also co-authored with Meghan McCain America, You Sexy Bitch.

As a stand-up comedian, Michael regularly tours the country, and he has released several comedy albums. His podcasts include Mike & Tom Eat Snacks, with Tom Cavanagh; Topics, with Michael Showalter; How to Be Amazing; and Obscure.

He lives in Connecticut with his wife and two children.