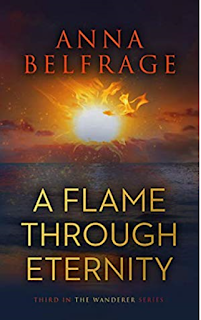 
It started 3 000 years ago. It ends now. Who survives the final confrontation?

According to Helle Madsen, being the protagonist of a time-spanning epic love story has some things going for it, primarily Jason Morris. Because seriously, meeting up with your fated lover after 3 000 years apart is not bad—at all. Unfortunately, where Jason goes, there goes Sam Woolf, yet another very, very ancient acquaintance—with the fundamental difference that Sam is not into Happily Ever After. He’s into destruction, more specifically of Jason and Helle.

Helle may believe in second-chance love, but she sure doesn’t believe in reincarnation. Okay, she didn’t believe in stuff like that until she met Jason Morris a year or so ago. By now, she has accepted that sometimes impossible things are quite, quite possible—like an ancient princess being reborn as an ambitious financial analyst.
Finding Jason was like finding the part of her that had always been missing—a perfect match. But handling Sam Woolf, the reborn version of their ancient nemesis is something of a trial. No sooner do you have him well and surely beat, but up he bounces again. Sheesh, will it take an oak stake to permanently rid their lives of him?

Sam Woolf is a powerful adversary. Too powerful, even. Jason and Helle will need help from unexpected quarters to finally bring this tangled, ancient love-and-hate triangle to some sort of conclusion. Question is, will they survive the experience?


Two men and a girl with the golden hair are reborn over and over again. After thirty centuries, things have to come to an end. This is a story about Helle and Jason, and Samion (Sam Woolf) who was never able to get Helle for himself and is hell bent on destroying both Helle and Jason. As the final installment of the series, A Flame Through Eternity is delivered by Belfrage with an amazing battle of the century to settle this once and for all.

This was a fun romantic suspense fantasy novel that captured my attention for its great characters that I enjoyed reading about, the creativity of these lost souls from 3,000 years ago now living amongst the present day was really fun for me. I loved that the undercurrent is about the love Jason and Helle has for each other. Something could not be lost and that is the love and connection Helle and Jason has for each other.

This is an entertaining read and definitely a good one to pick up. Had Anna been allowed to choose, she'd have become a professional time-traveller. As such a profession does not exist, she settled for second best and became a financial professional with two absorbing interests, namely history and writing. These days, Anna combines an exciting day-job with a large family and her writing endeavours. Plus she always finds the time to try out new recipes, chase down obscure rose bushes and initiate a home renovation scheme or two.

Her most recent release, A Torch in His Heart, is a step out of her comfort zone. Having previously published historical fiction & historical romance, with this first book about Jason and Helle Anna offers a dark and titillating contemporary romance, complete with a time-slip angle and hot & steamy scenes.

Her first series, The Graham Saga, is set in 17th century Scotland and Virginia/Maryland. It tells the story of Matthew and Alex, two people who should never have met - not when she was born three hundred years after him. With this heady blend of time-travel, romance, adventure, high drama and historical accuracy, Anna hopes to entertain and captivate, and is more than thrilled when readers tell her just how much they love her books and her characters. There are nine books in the series so far, but Anna is considering adding one or two more...

Her second series is set in the 1320s and features Adam de Guirande, his wife Kit, and their adventures and misfortunes in connection with Roger Mortimer's rise to power. The King's Greatest Enemy is a series where passion and drama play out against a complex political situation, where today's traitor may be tomorrow's hero, and the Wheel of Fortune never stops rolling.

If you want to know more about Anna, why not visit her website, https://www.annabelfrage.com